I just updated my profile pic and cover photo on Facebook and now I am having a mild panic attack. You see, September is Childhood Cancer Awareness month and so I always “Go Gold for Claire” and use her picture as my profile pic during the month. Seeing as it is almost the end of October I figured it was time for a change. So I finally posted a picture of myself and Dan that was taken on our wedding day back in July.

I love my husband (still sounds weird to say after being together for 10 years) more than words can say and am happy to show the world our happy faces, but a part of me feels guilty removing Claire’s photo because her profile pic never changes. She isn’t here to change it. It will always be the picture of her blowing out her candles on her 18th birthday. Time stopped for her when she was 18. It also stopped for me and yet cruelly and wonderfully it keeps on moving forward. 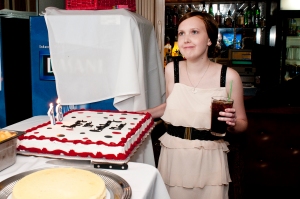 I also decided to update my cover photo and replace one of the last family photos that was taken when Claire was still alive, four years ago now. It was taken shortly after she had finished treatment and before she knew she relapsed so we were all happy and hopeful. But everyone in that picture and everything about it has changed. Some relationships have ended, or at least changed in form, and new ones have developed. Claire’s beautiful and contagious smile is now only seen in pictures, never in person. And even though the rest of us continue to smile, a sparkle is missing because we have become intimately acquainted with death and grief. 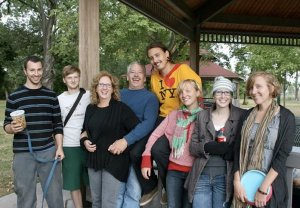 But I felt the time was right to replace it with a more recent family photo, one also taken in July when Ellen and her boyfriend Jesus were here from Santa Fe for our wedding. Unfortunately Seth’s girlfriend Natalie is missing because she couldn’t be with us that particular day even though she is part of the family. But most noticeably to me is that Claire is missing and starting with March 1, 2012 will always be missing from our family photos. We change and grow and live and laugh and love and life continues to move on. But Claire is frozen in time as a senior in high school even though her friends are now seniors in college. I know it is irrational, but I feel so guilty and like I am betraying her or abandoning her or something by posting a family picture without her in it. I suppose the reality of it all just comes crashing down on me once again. She is not coming back. She is gone. She is still here but we can’t see her. She is with us and we feel her but I cannot get any new photos of her. Ever.

So I hope as people “like” my new photos they remember that someone is missing. I have four children, not three, and will always have four children. Unfortunately my current family photos deny that truth. So even though a picture may be worth a thousand words, those words may not tell the whole story.

Four years ago today, October 17, 2011. One of those defining moments in time that, in retrospect, revealed the beginning of the end. The beginning of the end of Claire’s life. We already knew the rhabdo beast had reared its ugly head again, producing tumors in her breasts. But the doctors encouraged us to go ahead and leave for her already scheduled Make A Wish trip on October 21, reassuring us that as soon as we got back we would determine a plan to deal with those tumors using radiation and maybe chemo; whatever it would take.

So why on that Monday while at physical therapy and Claire noticed when glancing in the mirror that the left side of her face drooped ever so slightly, did they not immediately assume the cancer was growing elsewhere? They sent her down for an MRI, thinking it could possibly be a stroke. When “nothing” showed up on the MRI, why were they so certain it wasn’t the cancer? Especially when they knew how aggressive rhabdomyosarcoma is and that MRI’s aren’t as effective as PET scans to detect the disease. They decided it might be something like Bell’s palsy, and once again told us to have a good trip and hopefully it would get better but we’d figure it out when we got back.

Were they wanting to protect us from anticipating the inevitable untimely death of a young woman barely on the brink of becoming an adult? Or were they in their own denial, wanting so terribly to believe that it might not be that bad? I don’t blame anyone. And none of it really matters because nothing could have stopped it anyway. But looking back on it four years later I have more questions now than I did then. Questions for which there are no answers.

And part of me longs to go back to that time, which fills me with confusion and guilt. Claire had to suffer so much, would I really want her to have to go through that again? But she was still here. I could still talk to her, hear her voice, hug her, hold her on my lap, watch tv with her, drive her around in the car, take care of her. Now there is just distance. And it keeps increasing.

I was shocked into the reality of how long it has been the other day when one of my graduate students told me she was born the same year as Claire. Wow. Time stopped for Claire her senior year of high school. But this coming December she should be turning 22. What would she be doing? Finishing college? Traveling the world? Living with a boyfriend?

Instead Claire was robbed of her future. As the cancer continued to progress, the doctors made it clear that it was Claire’s choice if she wanted to continue with treatment in an effort to slow down the progress or if she wanted to stop fighting. I wrote about Claire’s response to this option on December 29, 2011 in a Caring Bridge post:

“But Claire is very determined and still wants to fight back. After being posed with this option while talking with the radiologist, she stepped out to give us some privacy to think about it. I asked Claire what she thought about it and she said, crying, “I can’t do nothing! I have to do something – I want to graduate and I want to go to college!” Heart wrenching stuff. So many things that we all take for granted, to Claire are exceedingly difficult challenges which she has to fight for with every inch of her being. Please pray that Claire will be able to accomplish her goals and that things will ease up a bit – for at least a while. This is all very surreal at times, and yet it has become our life.”

I still live constantly in a surreal state. I cannot believe this has become my life. Most days I tuck it all neatly inside me where no one can see and I carry on as though life is enjoyable, normal and has meaning. But deep down I endure the stabbing pain with each breath and the broken heart of losing a piece of myself. And some days it catches up to me and shuts me down completely. This time of year is hard because it represents the beginning of the end. I relive it each year, processing it on a new level, and feeling the same churning anxiety and anticipation of doom.

Fall brings cool days and cold nights and more darkness. It is an exercise in futility to properly prepare emotionally for Thanksgiving, Claire’s birthday, Christmas, a new year, the Valentine’s Day reminder of being sent home to die and finally the dreaded anniversary of March 1 at 3:06 a.m. when Claire took her last breath.

And yet she lived her life right up until the end. Here is a peek into her final days which I recorded on Caring Bridge on February 20 (Seth’s birthday), just ten days before she died:

“Claire slept most of the evening and Hannah, Ellen and I just sat in the room with her (in between the nurse and Dan coming in and out and helping here and there). It was very strange and surreal to watch her sleep and at times labor in her breathing, wondering to myself, is this what it’s like to watch your child slowly die? Which breath will be her last? Will I be here for it or will I miss it? Will she wake up tomorrow and be improved or will tomorrow be the day when she can no longer hear or see or communicate anymore? Will she somehow have some kind of rebound and live much longer than anyone expects? We don’t know if we have days or weeks – is how the doctor put it. But knowing Claire, who knows? She just asked me yesterday about going to pool therapy on Wednesday! And she’s determined to keep those stupid braces on even now. She has a foot in both worlds right now. Her body is failing her as the cancer continues to take over and rob her of so many physical abilities. But her mind is very much alive and living – still making plans and making jokes and getting irritated (especially when we struggle to understand her because her speech has been affected). Sometimes she just sighs and says, “you have no idea what I just said, do you?” And then tonight as she was trying to pick out a Jamba Juice she says with wry sarcasm, “I suppose I should get the low-cal one, huh?” She is so thin and her tiny frame is so fragile.
This is so ridiculous that this is happening. I am so angry and so devastated and so numb all at the same time. I look at others who have survived and wonder why that can’t be us, but then I look at others who have lost the fight and I feel terribly presumptuous in asking that we be spared the same pain. Nothing makes sense to me anymore, but in a way I’m ok with that. I know many of you have ways of dealing with and/or explaining these kinds of dilemmas, and that is great. But right now we don’t need to be given any explanations, we just need to live through this experience in our own unique private ways.”

Turns out I missed her last breath. She chose to go on her own, alone in her room, with none of us around. I was awakened at 3:06 by an unidentifiable cry which I choose to believe was Claire saying goodbye. For some reason I felt compelled to stay in my bed and not go check out the noise. A little over an hour later, Dan went in to give her some meds and she was gone.

I miss you Claire. Every minute of every day. I don’t really understand the point of all of this or of life itself. But I will continue to try to live one moment at a time. If for no other reason than to honor you because you wanted so badly to keep on living.